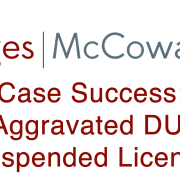 I’m Burges McCowan, criminal defense attorney here in the Phoenix area. I’m going to talk to you about a recent case I had, an aggravated DUI. That’s ARS 28-1383.

Ben was an old client of mine who we went to trial on a DUI and won. Unfortunately, he got another DUI. This time they were charging it as a felony because they were saying that his license was suspended when he got the DUI. Ben and his mom gave me a call to see what I could do. Unfortunately, the case was a lot stronger this time against him. Going to trial was probably not going to work for us. I went through the case word by word and looked for everything I can to help Ben out. I realized that he wasn’t really driving on a suspended license. The government had just charged the case incorrectly.

Surprisingly, this wasn’t caught by the prosecutor and we went way into the case before I finally was able to convince the prosecutor they just didn’t have the evidence to charge this as a felony. Unfortunately, he did still have a prior, which meant that he was looking at six months jail. Ben’s a PhD student. He couldn’t really afford to miss that much time from his studies. It was really going to set him back. I was able to convince this prosecutor that because Ben had done everything he could with rehab and was really a good student who just made a really bad mistake, that he could give him a break and gave him only 30 days jail.

He was able to knock out that jail this summer, and he’ll be right back at school in the fall. If you or a family member you know have ever been faced with something like this, give me a call. I do free consultations and I can help. 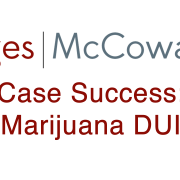 The client, Amy, was pulled over because she had a marijuana bumper sticker on her vehicle. The officer, knowing that she probably smoked marijuana, went ahead and charged her with DUI. Until recently, here in Arizona, if you had marijuana in your system, they could charge you with a DUI. Didn’t matter if you were actually high or not. That’s what happened to Amy.

Unfortunately, until recently, that was happening to a lot of people, but fortunately for Amy, when she gave me a call, I knew about the recent Arizona Supreme Court case that changed all of that. Now they have to prove that it’s active THC. That only stays in your system for a number of hours instead of weeks.

After reviewing her case and making sure that it applied to her, I took that to the prosecutor and got her case dismissed. I also told her to stop driving around with bumper sticker of marijuana on her car if she doesn’t want to get pulled over again.

If you or someone you know have had this problem before, give me a call. I do free consultations, and I can help.
End Transcript

Mark and his wife were threatened by some punks outside the bar as they were leaving. The bouncers at the bar ignored the situation. Mark was assaulted but was able to pull away. Mark and his wife got in their car and drove a couple miles away until they felt safe.  When the police arrived they confirmed the assault but also arrested Mark for DUI after smelling alcohol on his breath. Burges took the case to the jury and showed them how the police conducted a whole assault investigation without suspecting Mark of being impaired.  The jury agreed and acquitted Mark on the charge. Unfortunately, the Scottsdale police never charged the men that assaulted Mark.

Jim was waiting to turn left when he was struck by a truck.  Jim was a bit dazed from the accident when the police arrived.  The Scottsdale officer decided Jim was impaired but Jim didn’t have any alcohol in his system.  So Scottsdale charged Jim with being impaired by his prescription drugs.  At trial Burges got the State’s lab expert to admit that the levels of the prescription drugs in Jim’s system were probably not enough to impair him. The jury acquitted Jim in a matter of minutes.

Justin is deaf. He was stopped for DUI but the officer didn’t bother to get an interpreter before conducting his investigation. The officer even interrogated Justin without an interpreter. Burges did the research to prove Justin’s rights were violated and took it to the prosecutor.  At first the prosecutor fought the issue, but Burges persisted and eventually the prosecutor gave in and dismissed the case.

Floyd drove home from the bar and came upon a road that was shut down by the police. Even though the police had no reason to suspect Floyd of DUI, they smelled alcohol on his breath and arrested him. His BAC came back above .15. Burges negotiated a deal with the prosecutor that allowed Floyd to plead to a regular DUI instead. Then Burges convinced the judge to spare Floyd the mandatory 24 hours jail by giving him credit for the few hours he spent in jail the night he was arrested.

Matt was stopped in Scottsdale for DUI and charged with Extreme DUI when his BAC came back from the lab above .15. The prosecutor wouldn’t give Matt any deal so we took it to the jury. Burges cross-examined the police to expose flaws in their investigation.  The jury agreed Matt wasn’t extreme and acquitted him of the charge.

Brittany was driving home from a Scottsdale bar when she was stopped right after she pulled out of the parking lot. She was charged with Extreme DUI because the Scottsdale crime lab claimed her BAC was above .15. Burges exposed problems with the lab testing to the jury and Brittany was acquitted of the Extreme DUI.

Ben had a BAC of .241 when he was stopped for almost running a red light. The police dropped him on his face during transport and tried to blame it on him being drunk. Burges took the case to a jury and they agreed that Ben was not responsible and acquitted him of the Super Extreme DUI.

Jerry was a business man stopped by the police after his round of golf. He had a couple beers on the front 9 but felt there was no way he was above the limit and felt fine to drive. Burges showed the jury how the police were biased in their investigation and how the lab can get things wrong with the blood analysis. The jury agreed and dismissed the charge. Jerry is still working to improve his putting.