You are here: Home / Blog / Uncategorized 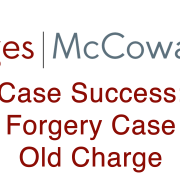 My client, Melinda, had an old forgery case that she was on probation for. Unfortunately a few years later the police charged her with yet another forgery but this forgery actually occurred back in her past, it wasn’t new. It was just government bureaucracy that resulted in it finally getting charged years later.

The government actually has up to seven years to charge you with cases. Like anything with the government sometimes it takes them a while. She was on probation and doing well. She got her GED, she’d cleaned up, taking care of her daughters but now she all of sudden had this new case charged even though it was really new.

Now the prosecutor that got this case, she was new and she didn’t quite understand that this was an old case that they just finally got around to charging. She wanted to put Melinda in prison. She wanted to really make a name for herself so it took quite a bit of conjouling with her to get her to realize this is not a new case. Technically under the Arizona law, she could still use it against Melinda to send her to prison even though it was an old case but I was able to finally convince this prosecutor that that wouldn’t be the just thing to do here and put Melinda back on probation.

It took a lot of fighting with this prosecutor but eventually we got that done and now Melinda’s back on probation and is back with her daughters and able to watch them go off to first grade. If you or family member that you know has ever been faced with something like this, give me a call, I do free consultations and I can help.